Sam was born on 5th November 1865 in Ilmington.  He was the sixth son of James and Martha Bennett of Foxcote Farm and was schooled in Ilmington & Ebrington.  He married Mary Elizabeth Barnett, of Ilmington in 1896.

He became a Country Carrier & Bramble Merchant and fiddler/ folk singer of repute. Sam was a fanatical  ‘purveyor’ of ‘the Morris’ , having learned the village tunes from Tom Foster, a pipe player.  During his life he became involved with other such ‘Morris’ persona  as ‘Jinky’ Wells of  Bampton and William Kimber of  Headington.  Sam formed a close association with Bampton and taught a young Arnold Woodley, then aged thirteen, his Broom Dance.  This was to be returned to the village tradition by Arnold in 1978 when he passed the dance back to Paul Bryan, on a memorable occasion outside The Red Lion Inn. 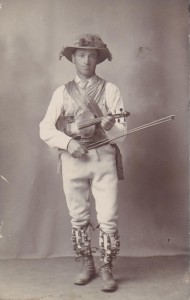 Sam continued his love of Morris in Ilmington until his death on 13th February 1951, at the age of 85.

As side musician Sam followed George Arthurs and Tom Foster, pipe players, and was superseded by Harry Sturch, George Renton, Graham Collicutt and Paul Bryan in the leadership of the music of the Morris in Ilmington.  Other musicians have also assisted them and to this day the side feature a number of fine musical talents on various instruments including fiddle, melodeon, concertina, and whistle.