The traditional Ilmington Morris Men come from the village of Ilmington which is situated 8 miles south of Stratford-upon-Avon, in the county of Warwickshire on the northern edge of the Cotswold Hills.  Although mainly a continuous tradition of Morris Dancing has been recorded within the village for more than 350 years, there have been a number of significant periods of revival of their own unique dances, which number 24, including a broom dance (believed to have come from nearby Blackwell) originally danced by Sam Bennett (Fiddler) from the early 1900’s.

There has been a record of the presence of Morris dancing in the village since the 17th century; then, according to history: ‘Morris dancers from Ilmington danced round a flag on Dovers Hill at Chipping Campden and on the flagpole was painted Heigh to the Cotswolds.  Their music came from a pipe and tabor’.

In 1805 the side became more enterprising.  George Arthurs was their inspiration and tutor.  He taught and played pipe and tabor for them in the old Webbs’ weaving rooms in the Ilmington. From 1867 Tom and James Arthurs, son and grandson, carried on the tradition together with one of their colleagues, Joseph Johnson, again significantly reviving the side in 1887.  His dancers included Tom who, although 82, was still able to perform a lively jig.

At that time, there was a considerable upsurge of interest in the Morris, mainly inspired by the revival of the Bidford Morris, by D’Arcy Ferris, a professional musician turned ‘Designer and Director of Fetes, Festivities, Festivals and Functions’.  Today the Bidford dances are performed by the Shakespeare Morris Men from Stratford upon Avon.

In 1897, the village saw another revival inspired by Joseph Johnson and Sam Bennett, for Queen Victoria’s Diamond Jubilee.  Sam had learned the tunes from the now old pipe and tabor player Tom, who died in 1891, and pipe player Tom Foster.  Sam also had close associations with the Bampton fiddler Bertie Clarke, and used to play for the Bampton men occasionally – he became well known as a morris dancer and musician throughout the country. On an occasion when Sam had fallen from a pear tree and broken his arm, Harry Sturch, from Shipston-on-Stour, played fiddle.  Harry having learned his playing from his grandfather Henry Sturch went on to play again for the Ilmington men in 1974 when a significant interest was again re-kindled by a number of local men including Chris Green, Stan Jones and Paul Bryan (born an Ilmington man). Harry or ‘Fid’ as he was known was able to give invaluable help to again raise the side to full strength- which has continued to flourish to the present day.

The Hobby Horse, now believed to be the oldest in the country, was introduced to the Ilmington tradition by Sam Bennett.  It was made in 1899 by Edwin Hancox who lived at no. 2 Great William Street inStratford-upon-Avon.  The horse was refurbished a number of times by Edwin and his son ‘Bill’ (Frank William Hancox) the original horse is still in use, although partly affected by the wood-worm !  Thankfully this has not spread to the ‘jockey’ ! 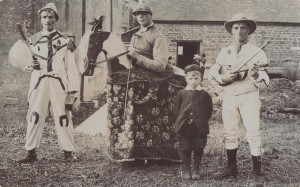